Spain and Sweden match in the European World Cup qualifiers 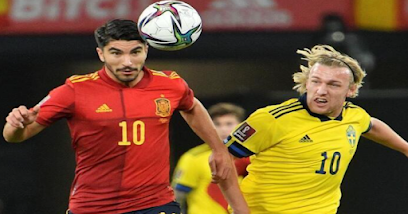 At the La Cartuja stadium, Spain will receive its Swedish counterpart in the second leg of the 10th round of the European qualifiers for the World Cup, today, on 11/14/2021, led by referee: Egino Abatista, and the match will be broadcast on the channel

The hosts enter the match in first place with 16 points, while the guest is in second place with 15 points.

The match between Spain and Sweden ended with Spain winning 1-0.

This match was played as part of the European World Cup qualifiers.

16th minute: A powerful shot from Foresberg near the post

52nd minute Foresberg continues to miss opportunities, the Swedish player fails to shoot from inside the penalty area.

The whistle at the end of the match, with the victory of Spain, with a goal for nothing, and its official qualification for the Qatar 2022 World Cup.