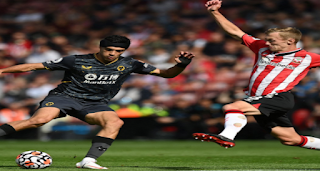 Southampton hosts Wolverhampton. Led by the referee: Andy Madley, at St. Mary's Stadium, as part of the two teams' matches in the sixth week of the English Premier League, the match will be held with a specific audience, due to the Corona pandemic.

The starting lineup for Southampton, led by coach Ralph Hasenhuttl:

The starting lineup for Wolverhampton, led by coach Bruno Lagg:

In the first leg of the sixth week of the English Premier League, at St. Mary's Stadium, Wolverhampton beat Southampton with a goal free of charge.

The 15th minute has passed, a quarter of an hour has passed from the events of the first half, and the negative tie is still in place so far.

The first half ended in a goalless draw.

The 59th minute, two dangerous chances after a wonderful rotation from Raul Jimenez to escape from the area and try to shoot, but the goalkeeper is ahead of him on the ball.

In the 61st minute, Raul Jimenez scored the first goal in the match for the Wolverhampton team, after a long ball from Sa. Raul Jimenez penetrated into the penalty area and with an individual goal, he evaded the defender and put the ball into the net.

The 75th minute corner kick in favor of Wolverhampton, sent the ball into the penalty area, but the defense dispersed it.

The match ended with Wolverhampton winning.

With this result, Wolverhampton raised its score to 6 points in thirteenth place, while Southampton's balance froze at 4 points in 16th place.