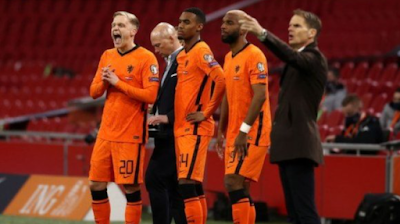 Donny van de Beek, Manchester United midfielder, was tired of sitting on the bench during the past season, which prompted him to search for a new destination, to obtain a greater margin of participation.

Since the appointment of Ronald Koeman as coach of Barcelona last summer, Van de Beek has been linked a lot with the move to Camp Nou, especially since Barca needs a midfield player of his quality, as he is an attacking hub and at the same time a playmaker.

According to the Spanish newspaper "Sport", Donny van Dijk Beek offered himself to Barcelona, ​​where he told the Catalan club officials that he was ready to come to the Camp Nou on loan, in light of Manchester United's unwillingness to abandon him permanently.

Although Van de Beek is admired by Ronald Koeman, his former coach in the Netherlands national team, Barcelona's idea is different, and is to search for a different midfielder, who tends to defend more than attack, which is not available in the Manchester United star.

Barcelona has not yet taken any decision regarding the loan of Van de Beek, but all options remain open, but what is now certain is that the Dutch star does not want to stay in Manchester United, especially since Ole Gunnar Solskjaer does not rely on him much.

It is possible that Ronald Koeman will use Van de Beek as a replacement for Wijnaldum, who moved to Paris Saint-Germain during the current summer transfers, despite the insistence of the Barca coach to sign him.