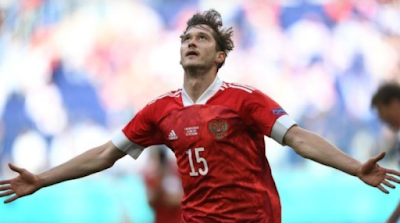 Russia today defeated Finland in the match that was held at the Krestovsky Stadium in Saint Petersburg as part of the calculations of the second round of Group B of the Euro 2020 finals.
And that result will change from the accounts of the second group, after Russia raised its score to 3 points, which is the same as the balance of the Finnish team, while awaiting the outcome of the decisive match between Denmark and Belgium tomorrow.
Russia's only goal was scored by Alexei Miranchuk in the second minute of added time of the first half, in that exciting match that witnessed many chances.
The first half witnessed absolute control from the Russian side, who played very intensely on the offensive side, and missed more than one chance achieved by Dzyuba and Golovin.
The Finnish team continued to defend, until Miranczuk managed to break through and hit a superb left-footed ball past goalkeeper Hradecky.
In the second half, the data changed, and the Finland team became the fastest and could have scored a tie through the movements of Timo Pukki and Pohianpalo, but the Russian defense shone to a large extent, especially the player Igor Devev.
Russia had new attempts as well through fast winger Alexander Golovin, but Finland goalkeeper Hradiki had great reactions, but the Finnish team failed to reach the goal of the Russians.
Euro 2020 News