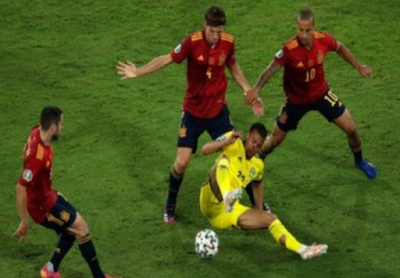 Spain coach Luis Enrique needs to make some changes to the squad he will play against Poland next Saturday, in the second round of the European Nations Cup "Euro 2020".

Spain dominated its first match against Sweden, but was satisfied with a goalless draw. After that meeting, Luis Enrique was widely criticized for his choices, as critics believed that some players who deserved the main participation sat on the bench and vice versa.

Criticism directed towards the Spain attacking trio, Ferran Torres, Dani Olmo and Alvaro Morata, due to the inability of one of them to score against the Swedish national team, and everyone was surprised to include Jordi Alba at left back.

According to the Spanish newspaper, “Marca”, Luis Enrique will make some changes to his starting lineup on Saturday against Poland, where Jose Luis Gaya will play at left-back instead of Jordi Alba, while Gerard Moreno will play in the attacking line in place of Dani Olmo from the start.

In the midfield, we can see Thiago Alcantara from the start, unlike what happened against Sweden, when Luis Enrique kept him until the second half, while Pablo Sarabia could replace Ferran Torres, while Alvaro Morata will retain his main seat.

Spain will need to win the next match, in order to avoid any surprises in the last round, but Poland is not an easy opponent, as it is looking for victory after losing against Slovakia in its first match.