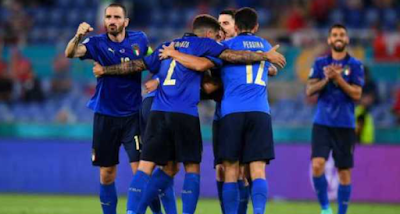 The Italian national team succeeded in securing its place in the round of the European Nations Cup "Euro 2020", after defeating Switzerland with three goals without a response.

The match hosted by the Olympic Stadium in Rome witnessed complete control of the Azzurri players, and Manuel Locatelli crowned the team’s superb performance with two great goals over the two halves, the first goal came in the 26th minute, while the second goal was scored in the 52nd minute, and Ciro Immobile scored the third goal in minute 88.

The Italian team raised its score to the sixth point, occupying the top of the group, while Wales comes second with 4 points, and Switzerland occupies third place with an orphan point, while Turkey is at the bottom of the standings without a balance.

The Azzurri need to avoid defeat only to ensure the top of the group, which gives him the opportunity to face the second-placed in Group C, which includes Austria, the Netherlands, Ukraine and North Macedonia, in the last eight to be hosted by Wembley Stadium on Saturday, June 26.

In the event of Italy losing, it will come in second place, which will make it face the second-placed in Group B, which includes Russia, Belgium, Finland and Denmark, in the final price match to be hosted by the Johan Cruyff Arena in Amsterdam on Saturday, June 26.

Switzerland plays its last match in the group stage against Turkey on Sunday, 20 June, at the same time, Italy plays Wales.