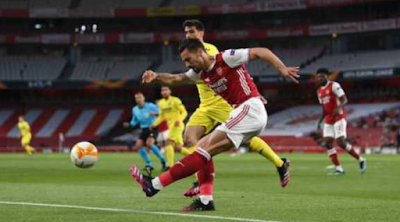 The Spanish team, Villarreal, managed to qualify for the European League final, at the expense of Arsenal, after a goalless draw that ended their match at the Emirates Stadium in London.

The first leg of the semi-final round at La Ceramica stadium ended with Villarreal winning two goals for a goal, and the players' failure to score a goal was enough to qualify for the final.

Gabonese star Pierre Aubameyang almost scored the precious qualifying goal for Janners in the 78th minute of the match, but the Spanish team roster was on the lookout for his header.

In the final, Villarreal will meet the English team Manchester United, who qualified at the expense of Roma, after beating him 8-5 on aggregate.

By failing to reach the final, Arsenal squandered the opportunity for four English teams to reach the final in the two European competitions this year, after Manchester City and Chelsea qualified for the Champions League final.

The final match of the European League will be held on May 26, at the PGE Arena in Gdansk, Poland.