Manchester United ascend to the final of the European League 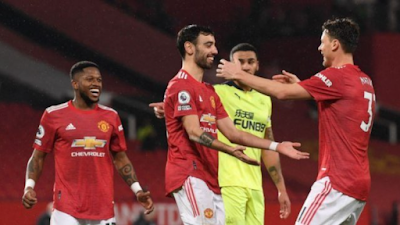 Manchester United was able to climb to the European League final, despite losing to Roma by three goals by two, in the meeting that brought them together this evening, Thursday, in the second leg of the semi-finals.

Manchester United took advantage of their victory in the first leg, with six goals for two, to reach the final for the first time since 2016, when he won the title at the expense of Ajax.

Roma missed a goal after the implementation of the direct free kick crossed into the penalty area prepared in front of the foot of Gianluca Mancini, who fired a direct ball, which was deflected by goalkeeper David De Gea, before the defense took care to divert the ball to a corner kick.

The 14th minute saw a powerful shot by Pedro, the Roma player, from the borders of the penalty area, and passed close to the top bar of the goal.

Manchester United wasted a real opportunity in the 20th minute after Edinson Cavani was completely alone with the goal and tried to hit the ball from the top of goalkeeper Antonio Merante, but the ball hit the crossbar and went straight off the pitch.

United opened the scoring in the 39th minute, after an elaborate pass from Fred towards Edinson Cavani, who came solo inside the Roma penalty area, and received the ball with a powerful shot that hit goalkeeper Antonio Merante.

In the 58th minute, Roma scored the equalizer, after a cross from the left front into the penalty area, which was met by Pedro with a powerful direct shot that found a follow-up from Eden Djico with a header and put the ball into the net.

In the 61st minute, Roma scored the second goal, after confusion by Manchester United defenders on the edge of the penalty area, Lorenzo Pellegrini took advantage of him and succeeded in extracting the ball and passed it to his colleague Brian Cristianti, who shot a powerful ball in the far right corner of the goal that landed in the net.

In the 69th minute, United scored the second goal, after a perfect cross from the left front by Bruno Fernandez towards Edinson Cavani, who cleverly started behind the Roma defenders inside the penalty area, who received the ball with a wonderful header and put the ball into the net.