Real Madrid and Barcelona match in the Spanish League 2021 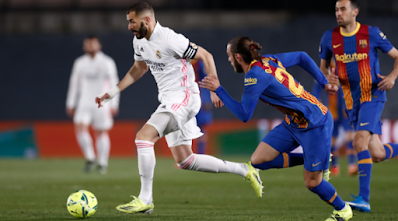 Real Madrid hosts its Barcelona counterpart. Led by referee Jess Gil Manzano, at the Alfredo Di Stéfano stadium, within the two teams' matches in the second leg of the 30th week of the Spanish League competition, the match will be held without the presence of the masses, due to the Corona pandemic.

In a match that cannot be divided by two, the two teams will enter with the slogan there is no substitute for victory to continue to march towards the top of the league and maintain hopes of achieving the League title in light of the stumbling of Atletico Madrid in the last matches.

The match will be held at Real Madrid's Alfredo Di Stéfano Stadium, which has a capacity of 6000 fans, due to repairs in the Santiago Bernabeu main stadium.

Real Madrid scored three victories in a row in the recent period and enters the match in high spirits after beating Liverpool in the first leg of the Champions League quarter-finals.

While Barcelona is in second place in the league standings with 65 points, two points behind Real Madrid, who is in third place, and Barcelona wants to continue victories to tighten the screws on leaders Atlético Madrid.

Minute 0 kicks off the events of the first half.

The 3 rd minute, Clemont Lenglet sent a long pass from the middle of the field and reached the goalkeeper Courtois, who grabbed it easily.

The 4 th minute, a mistake in favor of Barcelona from the middle of the field on the right.

The 9th minute, Jordi Alba sent a cross from the left side into the penalty area, which was dispersed by the goalkeeper Courtois with his fist, then the defense was dispersed.

The 10th minute is a corner kick in favor of Real Madrid from the right.

The 11th minute Kroos sent the ball into the penalty area and the defense dispersed it away from the danger area.

Minute 19, a mistake in favor of Barcelona from the left of the penalty area.

The 20th minute, Messi sent the ball into the penalty area and was dispersed by the defense.

The 23rd minute, Karim Benzema hit the ball directly and passed over the human wall, but outside the pitch, far from the goal.

The 27th minute, a mistake in favor of Real Madrid from a special place on the borders of the penalty area.

The 34th minute Vinicius Junior kicked the ball on the left side in a quick counterattack, then passed it beautifully to Valverde at the edge of the penalty area on the right, and the latter hit the ball, but it rebounded from the right post.

The 36th minute, a corner kick in favor of Real Madrid from the left.

The 39th minute, Lucas Vásquez defender fell on the pitch after a joint ball with Busquets and went outside the field to receive treatment.

The 43rd minute, the first forced substitution of Real Madrid due to Vázquez's injury.

The 45th minute is a two-minute substitute for lost time.

The 46th minute kicks off the events of the second half.

The 50th minute, a corner kick in favor of Barcelona from the right.

The 52nd minute, Odriozola sent a cross pass from the right into the penalty area, but the goalkeeper caught it before Benzema.

The 56th minute, Odriozola sent a cross pass from the right, which passed in front of Benzema outside the field.

The 57th minute Karim Benzema hit a powerful ball from outside the penalty area, but it passed outside the pitch far from the goal.

The 60th minute, Goole, the first goal of the Barcelona team, through Minguisa.

The 61st minute, Wardi Alba sent a cross from the left side, which Griezmann let her pass between his feet to reach Menguisa in front of the goal, and the latter hit the ball to pass to the left of the goalkeeper into the net.

The 62nd minute, the second switch for Real Madrid.

The 64th minute, the second switch for Barcelona.

The 72nd minute, the third and fourth substitution for Real Madrid.

The 73rd minute, the fifth and final switch for Real Madrid.

The 81st minute, the third, fourth and fifth switch in favor of Barcelona.

The 84th minute was a yellow card for Jordi Alba.

The 89th minute, a yellow card for Casemiro.

The 90th minute is a red card for Casemiro.

The 90th minute + 4 crossbar deprives Barcelona of the equalizer.

With this result, Real Madrid tops the top of the Spanish League table temporarily with 66 points, equal in points with the Atletico team, waiting for tomorrow's match for the Atletico Madrid team.

While Barcelona are in third place, one point behind them, with 65 points.