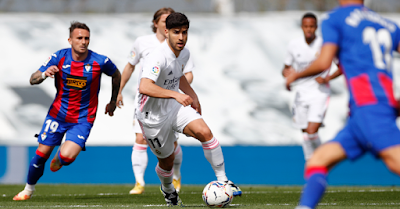 Real Madrid hosts its counterpart, Eibar. Led by referee Isidro Diaz, at the Alfredo Di Stéfano stadium, within the two teams' matches in the second leg of the twenty-ninth week of the Spanish League competition, the match will be held without an audience due to the Corona pandemic.

Minute 0 kicks off the events of the first half.

Minute 1 passes between Real Madrid players in the middle of the field.

Minute 3, Benzema penetrated the ball into the penalty area, then hit a powerful ball, which was saved by goalkeeper Demetrovic brilliantly.

Minute 4, a corner kick for Real Madrid from the left.

Minute 5, the ball was sent inside the penalty area and passed off the field without danger.

Minute 6, Benzema received the ball behind the defenders, then hit the ball in the net, but was in an offside position.

Minute 7 Casemiro hit the ball from outside the penalty area, but it rebounded from the feet of one of the defenders.

The 16th minute is a corner kick in favor of Eibar from the right.

The 17th minute sent the ball into the penalty area and was dispersed by the defense.

The 22nd minute, a mistake in favor of Real Madrid from the right of the penalty area.

The 22nd minute, Marco Asensio hit the ball directly, but it rebounded off the crossbar.

The 25th minute passes between Real Madrid players in the middle of the field.

The 25th minute, a corner kick in favor of Eibar from the left.

The 25th minute, Pedro Lyon sent the ball into the penalty area, but the defense was dispersed from the first post.

The 37th minute, a Real Madrid goal was canceled for infiltration by Asensio.

The 41st minute, Goool, the first goal of Real Madrid through Asensio, Casemiro sent a wonderful pass from the middle of the field to Asensio, who started behind the defenders and then hit the ball in the far right corner.

The 45th minute kicks off the events of the second half.

The 46th minute, the first substitution for Eibar, with the descent of Inwi and the exit of Brian Gill.

The 61st minute, the first transfer of Real Madrid, with the descent of Toni Kroos and the exit of Modric.

The 61st minute, the second switch for Real Madrid, with Silva's descent and Asensio's exit.

The 73rd minute, Jowool, the second goal of Real Madrid through Karim Benzema, Vinicius Junior skilfully penetrated the ball from the left side into the penalty area and then sent a perfect cross pass, which Benzema met with a header that passed to the left of goalkeeper Demetrovic into the net.

The 74th minute, a shot on goal by Karim Benzema, caught by the goalkeeper

The 80th minute, the fifth and final switch for Real Madrid, with the descent of Mariano Diaz and the exit of Benzema.

The 80th minute is a cross pass from Enrique Garcia Kiki.

The 81st minute, a shot by Vinicius Junior

The 83rd minute, a shot by Enrique Garcia Kiki

The 84th minute, a goal kick from Thibaut Courtois

The 87th minute, a shot on goal by Takashi Inwi, was blocked by the goalkeeper

The 88th minute, a direct free kick from Nacho Fernandez

The 88th minute, a goal kick by Marko Dmitrovic

The minute the match ended with Real Madrid winning.