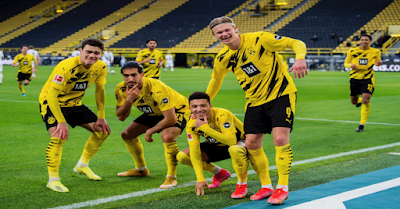 Borussia Dortmund will host their Armenian counterpart Belfield. Led by referee Tobias Reichel, at Signal Iduna Park, within the two teams' matches in the second leg of the twenty-third week of the German League competition, the match will be held without an audience due to the Corona pandemic.

In the twenty-third round of the German League, at the Signal Iduna Park stadium, Borussia Dortmund defeated Armenia Bielefeld with a clean double.

A goalless draw dominated the first half of the match.

In the 47th minute, Daoud scored the first goal for Borussia Dortmund. Sancho penetrated from the left side and ragged the defenders and passed the ball to Mahmoud Daoud to shoot a powerful ball to the right of the goalkeeper.

In the 80th minute, Reinier Jesus Carvalho scored the second goal for Borussia Dortmund, after a wonderful pass from Haaland reached Renner to put it in the goal easily.

To end the meeting with the victory of Borussia Dortmund.

With this result, Borussia Dortmund's balance rose to 39 points, placing it in fifth place, while Armenia's Bielefeld balance stopped at 18 points in sixteenth place.