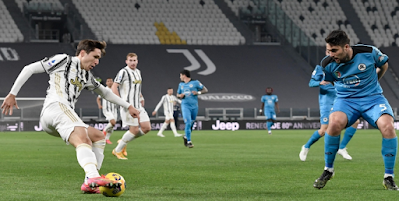 Juventus will host its counterpart, Spezia. At the Allianz Stadium, within the matches of the two teams in the first leg of the 25th week of the Italian League, led by referee Juan Luca Sacchi, the match will be held without the presence of the masses, due to the Corona pandemic.

The match ended between Juventus and Cesia, with Juventus winning, with three goals to none.

This match was played in the framework of the Italian League matches of the twenty-fifth week.

And the first goal for Juventus was scored by Alvaro Morata in the 62nd minute of the second half.

The second goal was added by Federico Chiesa in the 71st minute of the second half.

The third goal was scored by Cristiano Ronaldo in the 89th minute.

The match ended with Juventus winning, with three goals to none.

With this victory, Juventus' score brings points to 49 points in third place.