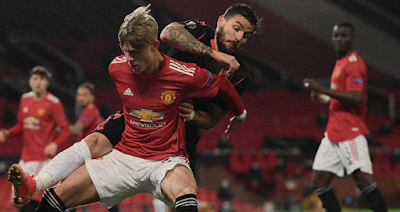 Manchester United will host its Spanish counterpart, Real Sociedad. At Old Trafford, led by referee Lawrence Visser, in the matches of the two teams in the second leg of the European League, and the match is held without the presence of the masses, due to the Corona pandemic.

The starting line-up for Manchester United, led by coach Solshire:

Manchester United benefited from winning the first-leg match away from home with goals at the Allianz Stadium in Turin to ensure they qualify for the next round.

Real Sociedad missed a penalty kick they had obtained in the 12th minute of the first half.

Manchester United missed a valuable opportunity to score the first goal of the match in the 24th minute.

In the 63rd minute, Manchester United managed to score a goal, which the referee canceled after returning to the mouse due to a violation.

Merkelans hit a powerful ball from outside the penalty area. Henderson tackled it twice in the 88th minute of the match.

To end the match between the two teams, the result of a negative draw zero to zero.