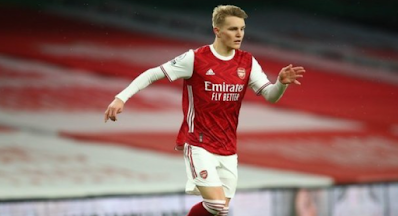 The young Norwegian star Martin Odegaard on loan to Arsenal has opened the door to his final departure from his club, Real Madrid, after the end of the current season, indicating that all possibilities are in the summer.

Odegaard left Real Madrid in the middle of the season to join Arsenal for a period of six months on loan, due to his lack of regular participation under coach Zinedine Zidane.

Odegaard played his first match with Arsenal, mainly last Sunday, against Leeds United, and he helped his team win 4-2, and gave good results during the match.

The British Daily Mirror newspaper reported that Arsenal did not succeed in convincing Real Madrid to include the final purchase option in the summer Mercato, but he would try to persuade the player to continue in the Princes' Park Stadium in order to pressure the royal club.

"In fact, you do not know what will happen," Odegaard told the media when asked about his return to Real Madrid after the end of the season. "At the moment I am only focused on doing my best this season and helping the team achieve victories."

The young Norwegian star also expressed his happiness at Arsenal and his feeling of comfort, and the English newspaper considered these statements as a hint of the possibility of leaving Real Madrid permanently in the summer.