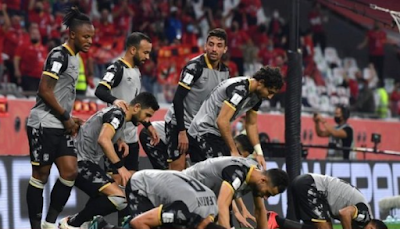 The Congolese club Mazembe supported Al Ahly of Egypt after its brilliance in the Club World Cup and reaching the semi finals after defeating Al-Duhail, Qatar.

Al-Ahly is participating in the Club World Cup for the sixth time in its history, and it has reached the golden square for the third time, beating all Arab and African clubs.

The official Mazembe account wrote on Twitter: "The African champion has succeeded in his first step in the Club World Cup."

He added: "Al-Ahly challenges Bayern Munich in the semi-finals of the Club World Cup."

BBC Sports revealed the suspension of the match between Al Ahly and Bayern Munich, in the semi final of the Club World Cup.

Al Ahly had crossed the obstacle of Al-Duhail, Qatar, on Thursday, and reached the semi-finals of the FIFA World Cup, to hit a date with Bayern Munich next Monday evening.

The management of the BBC Sport channels assigned the task of commenting and a detailed description of the match to the commentator Ali Muhammad Ali.

Algerian Hafeez Darraji was the one who commented on the match between Al-Ahly and Al-Duhail, which was decided by the African champion in his favor with a goal without a response.