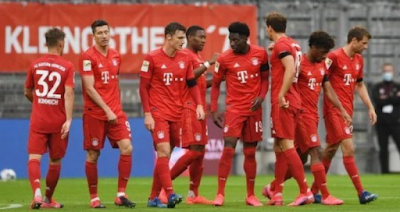 Bayern Munich survived the loss to Armenia Bielefeld, and tied with it (3-3) at the end of the 21st round of the Bundesliga championship.

Bayern raised its score to 49 points at the top of the standings, and the difference between it and Yen Leipzig II became 5 points, while Bielefeld raised its tally to 18 in the sixteenth place.

The guests ended the first half, leading by two unanswered goals, scored by Dutchman Michel Flapp in the 9th minute, and Amos Bieber in the 37th minute, in the midst of a large snowfall.

But the Bavarian team returned strongly in the second half, and reduced the difference with a goal by Robert Lewandowski in the 49th minute, and after one minute the difference returned as it was with a third goal for Bielefide through Christian Gabor.

However, Bayern kept the same motivations, scoring the second goal through Corentin Tolisso in the 57th minute, and then equalized by Alfonso Davis in the 70th minute.