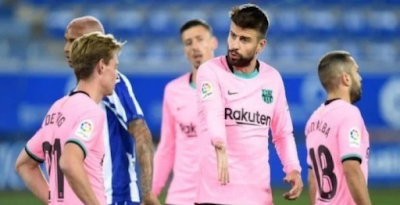 Barcelona announced on its official website the list of the team that coach Ronald Koeman chose for the Paris Saint-Germain match, which will be held today, Tuesday, at the Camp Nou, in the first leg of the 16th round of the Champions League.

The Barcelona list saw a pleasant surprise with the return of Spanish defender Gerard Pique after a long absence that lasted for nearly 3 months, and this would give more solutions to coach Ronald Koeman on the defensive front, whether in today's match or the upcoming benefits.

It is expected that Gerard Pique will not participate mainly in today's match, because of course he is not ready 100% physically, and most likely he will remain seated on the bench, with the possibility of his participation in the second half.

Barcelona still suffers from some important absences at the head of the young Spanish striker Ansu Fati, as well as Sergi Roberto, Philippe Coutinho and Ronald Arajo, while the list has seen the return of Martin Braithwaite, who missed the last two matches due to injury.