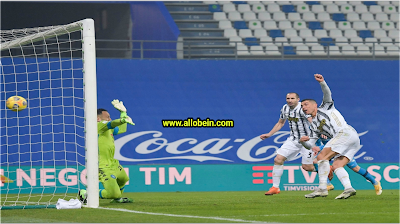 Juventus club hosted its counterpart, Napoli, today, 20-1-2021, today, Wednesday, under the leadership of referee Paolo Valerie, at Mapei Stadium, within the two teams' matches in the Italian Super Cup final, the match will be held without the presence of the masses due to the Corona pandemic.

Minute 1 start of the match.

Minute 3, a fight for the ball between the players in the middle of the field.

The 6th minute, pressure from Juventus to score the first goal.

The 9th minute, a shot by Artur of Juventus from outside the penalty area, but far from the goal.

The 15th minute has passed a quarter of an hour after the events of the first half, and a goalless tie continues until now.

The 18th minute is confined to playing in the middle of the field.

The 20th minute, a shot by Insigne from outside the penalty area, was successfully blocked by the Juventus goalkeeper.

The 27th minute, short passes between Napoli players in the midfield.

The 28th minute is a wonderful response from Chesney.

Minute 30 Half an hour has passed since the events of the first half, and a goalless tie continues until now.

The 33rd minute, timid attempts by the Juventus players to score the first goal, amid the retreat of the Napoli players.

The 35th minute, a Ronaldo shot hitting the Napoli defense and a very strong pressure from the Juventus players.

The 39th minute, a Ronaldo shot from the left of the penalty area, but passed over the crossbar of the Napoli goal.

The 42nd minute, passes between Juventus players in the midfield.

The 45th minute ended with a goalless draw.

The 46th minute, the beginning of the second half events.

The 48th minute, a cross from Luzato from the right of the penalty area, was met by Demi, the Napoli midfielder, but went to a goal kick.

The 55th minute, Ospina injured the Napoli player, and playing was suspended.

The 58th minute, Juventus tried to score the first goal, to no avail.

The 60th minute passed a quarter of an hour after the events of the second half, and a goalless draw is still in progress.

The 60th minute, a shot by Ronaldo from outside the penalty area, hit the defense of Napoli and reached the goalkeeper.

The 70th minute, a Cubrado ball curved from the right side, from a corner kick that was successfully dispersed by the Napoli defense.

The 72nd minute, short passes between Napoli players in the midfield.

The 75th minute, half an hour passed by the events of the second half, and Juventus are still leading with a clean goal over Napoli so far.

The 78th minute is a penalty kick for the Napoli screamer, which was awarded to the referee after Incini was blocked in the penalty area by Juventus midfielder McKinney.

The 81st minute, a shot by Lorenzo Insigne, the penalty kick taker, passed by the right post of Juventus' goal.

The 85th minute, attempts by Juventus players to consume time.

The 89th minute yellow card on the Napoli player Zelensky.

The 90th minute is 5 minutes of lost time calculated by the match referee.

The 3 minute + 90 crosses from the right of the penalty area were met by Mertens with a low shot, but a wonderful save from the Juventus goalkeeper.

Minute 5 + 90 Gooool in favor of Juventus through Morata.