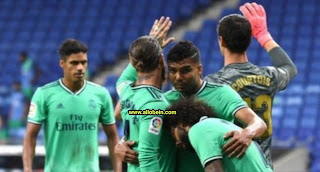 Real Madrid announced the departure of its Serbian striker Luka Jovi go to his former German club, Eintracht Frankfurt, in a statement on its official website, Thursday evening.

Jovic returns to his former team on loan from Real Madrid for a period of six months, starting from January until the end of the season, provided that the royal club will take charge of 80% of his salary during the loan period.

Real decided to leave Jovic from the team's mantle due to his long sitting on the bench seats of French coach Zinedine Zidane, in the matches of this season.

Frankfurt on loan to Luka Jovic until the end of the season.

The Spanish team hopes that Jovic will benefit from the loan to the German League to return to the Santiago Bernabeu again next season in the best possible way, to take advantage of his capabilities in the Merengue.

The German club also announced the assignment of the player, who was widely recognized for his shirt before the Real Madrid got his signature in 2019.