Osasuna imposes a draw on Real Madrid in La Liga 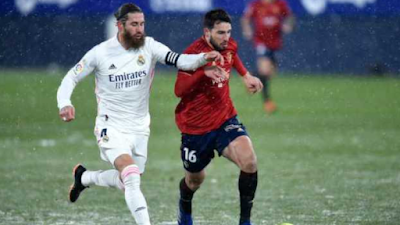 The Osasuna team imposed a tie against Real Madrid, with a score of 0-0 in the match that was held at the "El Sadar" stadium, in the 18th round of La Liga, to raise Real Madrid to 38 points in second place with the same score of Atletico Madrid leaders, while Osasuna raised His score to 15 points in nineteenth place.

The first half of the match did not witness real chances on the two goals, as the players ’performance was affected by the bad weather, as well as by the poor snow-covered pitch, while the 8th minute witnessed the first opportunity in the match after Varane hit a long-range ball that almost missed the goalkeeper who blocked the ball. Both times.

In the 29th minute, Osasuna almost snatched the lead after a corner and then a header from Oier, but goalkeeper Courtois removed the ball, then Modric sent a cross that was removed by the goalkeeper and then followed it up with another shot that the defender dispersed from his own goal in the 31st minute. As a result.

With the start of the second half, Vázquez sent a dangerous cross, but the goalkeeper sent it away, then the defense was dispersed in the 46th minute, then Osasuna responded with a shot from outside the penalty area, but easy for the goalkeeper, and then Asensio fired a strong ball, but the goalkeeper removed it with difficulty, then Real Madrid's advantage continued On the atmosphere of the match.

In the "60th" minute, Benzema scored the goal for you, which was canceled for infiltration, then Asensio left and Valverde entered from Real Madrid in the 65th minute. Osasuna missed an opportunity for an investigator after a ball reached Torres, who shot it far from the goal in the 71st minute. Modric and Hazard went out, Mariano and Isco came in.

In the 88th minute, Real Madrid scored the lead, but was canceled due to offside, Mendy fired a ball from inside the penalty area, but it was far from the goal, after which the meeting ended with a goalless draw.