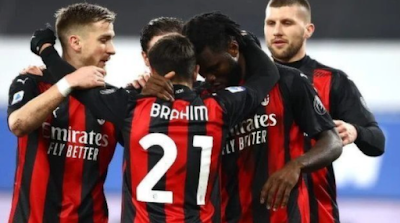 The Milan team regained the winning tone, with an important victory over its guest Turin, in the seventeenth round of the Italian league, with a score of "2-0".

Milan raised its score to 40 points, consolidating its position at the top of the standings, and stuck in Turin at 12 points, in the eighteenth place.

The Rossiniere advanced in the confrontation with a goal in the 25th minute, as Theo played the ball to Brahim Diaz, who passed it to Rafael Liao, to put the Portuguese in the net with his ability.

Diaz gets a penalty kick, which Ivorian Frank Casey successfully translated to the left of goalkeeper Salvatore Serigo, and adds the second goal in the 36th minute.