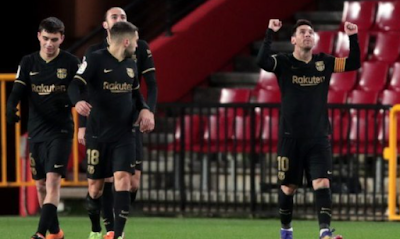 Barcelona achieved its third victory in a row, and came at the expense of its host Granada, in the match of the eighteenth round of the Spanish League championship, with a score of "4-0", to raise Barca's score to 34 points, and regain the third place, and Granada remained the seventh with 24 points.

The owner of the land was the initiator, as he almost scored a goal in the second minute with a shot from the player Puertas, but goalkeeper Ter Stegen responded with great ingenuity, and in the 12th minute Busquets passed the ball to hit Granada player Roberto Soldado and reached Griezmann, who shot it in the net.

In the 15th minute, Barcelona tried again through Osman Dembele, but his ground shot went past the right post, and Granada tried twice after that, but Soldado's ball in the 22nd minute went far, and Macchis' ball in the 32nd minute was not that dangerous, so Ter Stegen held it firmly.

At the 35th minute, Lionel Messi scored the second goal in a wonderful way, as he received the ball after a run from Griezmann on the left side, and he fired it beautifully to the right of goalkeeper Roy Silva, then added the third goal in the 42nd minute, with a wonderful shot from a fixed kick.

Granada tried to do something at the start of the second half, where he had an attempt through Puertas, but it did not pose a great danger, and brilliant Antoine Griezmann scored the fourth goal in a wonderful way, after an amazing pass from Dembele to his fellow countryman who received the ball with his right and shot it with his left in the far right corner For the goal.

In the 66th minute, Jordi Alba almost scored the fifth goal for Barca, where he fired a powerful ball that was close to entering the goal, at this time he gave Ronald Koeman an opportunity for the reserve players and rested some stars, such as Messi and De Jong.