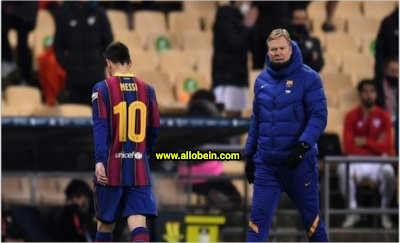 Barcelona will play a special match on Thursday in the 32nd round of the King's Cup against a second division team, Cornella.

Koeman confirmed at Barcelona's press conference that he does not want to mention the expected squad, and that he hopes to reduce Lionel Messi penalty.

Messi was hit by a red card for the first time in his career while Barca lost to Bilbao in the 3/2 Spanish Super Cup final.

There were many complaints in the vicinity of Barcelona about the turf of the Cornella stadium, and the Dutchman confirmed that he opposes artificial turf and is not suitable for playing football.

Regarding Messi condition, he said: "He trained without problems this morning and has recovered well from the last game after playing 120 minutes. He will be ready to play after the suspension ends."

Turning to Pjanic's case, he said: "Recently, he participated in a few matches because we decided to play with a slightly different midfield and chose Busquets, Frenkie and Pedri. The situation is complicated, but he will have time to participate and we need to compete with players to participate in every position."

About Trinkau, he said: "As I said before, he has just arrived from Braga and is a young player at the age of 20, and moving to Barcelona is a big step for him, but he is working well and on the right track."

Returning to talking about Messi penalty, he said: "The club told me that it will be suspended for two matches. The club does not agree and we will see if they can reduce the penalty."

As for news of Messi move to Paris Saint Germain, the Barca coach commented: "If they asked me about my interest in Neymar and Mbabi, I would say yes, I do not know what might happen in the future. I cannot comment on this news as I am trying to get the best team possible."