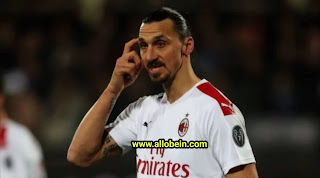 Milan succeeded in achieving a new victory in the Italian League at the expense of its host Cagliari in the match that was held between them at the Sardinia Arena in the framework of the 18th round.
Milan advanced early after just 7 minutes of the match, after Swedish star Zlatan Ibrahimovic was fouled inside the Cagliari penalty area to get a penalty kick that he brilliantly executed himself in the net. And David Calabria almost doubled the score for Milan with a great direct shot that bounced off the post, and all Cagliari's attempts to threaten Gianluigi Donnarumma's goal were unsuccessful, and the first half ended with Milan leading with a clean goal.
In the second half, Ibrahimovic succeeded in adding the second personal goal for him and his team as well in the 52nd minute, after receiving a wonderful long ball from Calabria, which was shot with his left past Cagliari.
Lens Howe in the 66th minute, after receiving two yellow cards in less than 10 minutes after a strong intervention on Gabriel Zappa in the 68th minute, followed by a pull by Luca Sebitelli to prevent him from a counterattack.
Despite Cagliari's attempts to return in the match, the team completely lacked accuracy on goal, as only twice between the posts and the crossbar were paid over the entire match out of a total of 17 attempts, to end the match with the Rossoneri winning two clean goals.
With this victory, Milan raised its score to the 43rd point, occupying the top of the Italian league table, while Cagliari's balance was frozen at the 14th point in 17th place.
Italian League La Liga Milan News