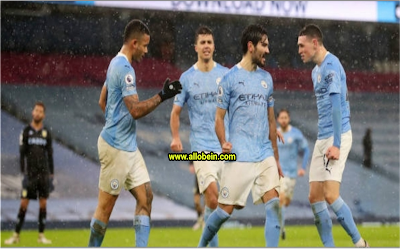 Manchester City club hosted its counterpart, Aston Villa today, 20-1-2021, today, Wednesday, under the leadership of referee Jonathan Moss, at the Etihad Stadium, within the matches of the two teams in the first week of the Premier League competition, the match will be held without the presence of the masses due to the Corona pandemic.

In a postponed match in the first round of the Premier League competition, at the Etihad Stadium, Manchester City defeated its guest Aston Villa with a clean double.

In the 27th minute, Aston Villa almost scored the first goal after Grealish got rid of Walker on the left, before preparing the ball for Traore, who scored the side net from outside.

In the 67th minute, Watkins sent a cross to the six-yard area, Diaz sent it away to reach Traore, whose attempt from Zinchenko rebounded to Douglas Luiz, and the latter shot a ball that was removed by the goalkeeper.

In the 79th minute, Bernardo Silva scored the first goal for City, when Silva took the ball to advance and kicked it from outside the penalty area to the right of goalkeeper Martinez.

In the 90th minute, Gundogan scored the winning goal for City, after the referee awarded a penalty kick after a clear handball on Cash, which Gundogan had scored successfully, and the Aston Villa coach was dismissed for protesting the penalty kick.

With this result, Manchester City's balance rose to 38 points in second place, while Aston Villa's balance stuck at 26 points in eleventh place.