Full summary : The Deportivo Alaves and Sevilla match in the Spanish League competition 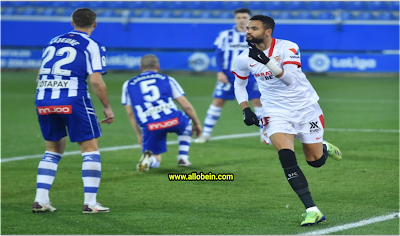 The Deportivo Alves team hosted its counterpart today, on 19-01-2021, today, Tuesday, the Seville team, led by referee Diaz de Mera, at Mendizorosa Stadium, as part of the first-leg match between the two teams in the Spanish League competition from week 19, and the match will be held without the presence of the fans, due to the Corona pandemic.

The starting line-up for Deportivo Alaves led by coach Abelardo:

The starting line-up for the Sevilla team led by coach Julen Lopetegui:

The match between Deportivo Alaves and Seville ended with a 2-1 win for Sevilla.

And the Sevilla team's goal was scored by Youssef Al-Nassiri in the 3rd minute of the match.

Then Edgar Mendes tied for Alaves in the 12th minute of the first half.

Soso scored the winning goal for Sevilla in the 30th minute of the first half.

The match ended with the same first-half result, with Sevilla defeating Deportivo Alaves, with two goals to one.

With this victory, the Sevilla team's score brings points to 33 in fourth place.

While the Alves team freezes at point 18 in seventeenth place in the ranking table.