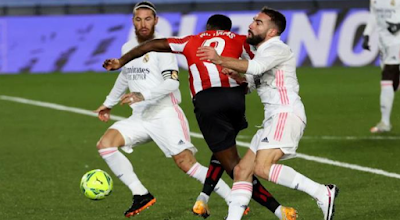 Athletic Bilbao hosts its Real Madrid counterpart. Led by referee Juan Martínez Monoeira, at La Rosaleda, in the first-leg match between the two teams in the Spanish Super Cup, the match will be held without the presence of the masses, due to the Corona pandemic.

Follow up the events of the meeting minute by minute

Minute 1 starting the first half.

Minute 4 Ferland Mindy tried to pass from the left, but the defense removed the ball from in front of him to a corner kick.

The 5 minute cross from Luka Modric into the penalty area, Bilbao's defense kept it away from dangerous areas.

The 10th minute was a corner kick for Real Madrid from the left, which was carried out by Toni Kroos through a cross into the penalty area, which was removed by the Bilbao defense from dangerous areas.

The 16th minute, a free kick in favor of Real Madrid in the middle of the field, after a mistake by Bilbao Under Capa.

The 22nd minute, attempts by Real Madrid players to equalize, matched by a good defensive positioning by the Bilbao players.

The 36th minute, a penalty kick in favor of Bilbao, after a mistake by Lucas Vásquez inside the penalty area.

The 38th minute, gooooooooooooooooool, second for Real Madrid through Raul Garcia from the penalty mark.

The 44th minute, a shot by Tony Crosse from the edge of the penalty area, was caught by goalkeeper Unai Simon from the middle of his own goal.

Minute 45 whistle end of the first half.

The beginning of the second half events

The 46th minute whistle the beginning of the second half.

The 50th minute was a cross from Ferland Mendy from the left into the penalty area, which was removed by the Bilbao defense from dangerous areas.

The 52nd minute, Karim Benzema's header from inside the penalty area reached an easy way for goalkeeper Unai Simon.

The 59th minute, a powerful shot from Madrid's Marco Asensio from the edge of the penalty area, passed over the bar.

The 60th minute, attempts by Real Madrid players to equalize, matched by a good defensive positioning by the Bilbao players.

The 62nd minute, a cross from Casemiro into the penalty area, did not find a follower of his team's players.

The 63rd minute, a shot by Marco Asensio from inside the penalty area, passed just above the bar.

The 73rd minute, a goal in favor of Real Madrid was canceled due to offside Karim Benzema .. The match referee reviews the mouse technique to determine the correctness of the goal.

The 83rd minute is another goal canceled by Real Madrid due to offside Karim Benzema.

The 85th minute is five minutes from the end of the match, and the score still indicates the Bilbao team's lead with two goals to none.

The 86th minute went to a yellow card by Dani Garcia, the Bilbao player, after a violent intervention.

The 88th minute went to a yellow card by Unai Simon, the Bilbao player, due to wasting time.

The 90th minute, the referee added 6 minutes as a calculated time instead of lost.

Athletic Bilbao scored the goal in the 18th minute of the first half, by Raul Garcia.

Then the same player Raul Garcia added the second goal to Athletic Bilbao in the 38th minute, with a penalty kick that he executed brilliantly.

Karim Benzema scored the only goal of Real Madrid in the 73rd minute of the second half.

Real Madrid missed two goals, one in the crossbar and the other in the post, during the events of the second half.

With this result, he will meet Athletic Bilbao in the final of the tournament with the Barcelona team.