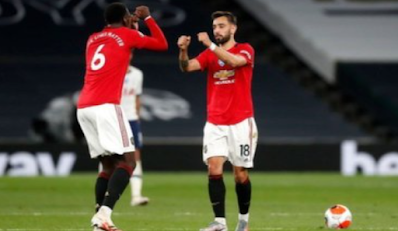 Manchester United star Bruno Fernandez defended his French colleague Paul Pogba, saying that the criticism against him was unfair.

He expected a lot from United with the presence of Fernandez next to Pogba after signing the Portuguese from Sporting Lisbon during the 2020 winter transfer period.

However, after just one year, the Portuguese international became the cornerstone of the United team and proved to be decisive in every game for the Red Devils, while Pogba's level fell slightly.

Fernandez expects that Pogba will be important to the United team strongly in the coming period, and he confirmed that he is happy to be with him in the same team.

About his relationship with the French star, Bruno Fernandez told NBC Sport: “My relationship with Paul Pogba is good. We speak Italian together and I have known him since he was in Italy, so it is easy to work with him.”

He continued: “He was injured after my arrival and I saw him recover and train on the field away from us, but he was always communicating with me, and he used to tell me that he followed my movements in the matches and when he came back he would know how he will find me on the field.

Pogba continued to face press criticism this season, especially since his future is still clear with the club and he has been linked to move to another club at the end of the season.

"We finished last season very well, but the start of the season was difficult for Pogba because he was infected with the Corona virus," said Bruno Fernandez of the former Juventus star.

Bruno concluded his remarks: "It was difficult for Pogba to return to his level after 15 days of health isolation, but I think he has gotten a lot better recently and feels more confident. The goal is against West, to give him more confidence, and the team needs him and he has the quality to help us."