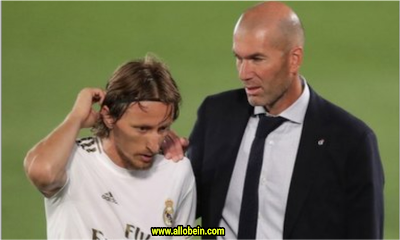 The pro Barcelona newspaper, Mundo Deportivo, criticized Zinedine Zidane, the current Real Madrid coach, as it indicated that he plays against Merengue and not with him.

Despite Barcelona's cruel loss at the hands of Athletic Bilbao yesterday evening, Sunday, in the Spanish Super Cup final by three goals for two after referring to extra times, and expelling Lionel Messi, the first in his history with Barca, the newspaper went to criticize Zidane's style and strategy currently followed with Real Madrid.

The newspaper pointed out that Zidane plays against Real Madrid by killing the talent on the team, and playing almost the same squad that he won in his last European Champions League title in 2018.

In order to sign the big stars, so the club followed the strategy of hiring young stars, hoping to make a difference with the team.

Real Madrid has signed during the last period with young stars such as "Rodrigo Jos, Vinicius, Rainier, Cobo, Ibrahim Diaz" and others in order to build a new young team that will dominate the European scene for several years.

But Zinedine Zidane did not give these young people the real opportunity to appear with Real Madrid, by relying on the old guard, as he is currently playing with seven players who participated in the Cardiff Final in 2018, in an explicit call that he will not give these young people the opportunity to play continuously, and thus puts The club is in an embarrassing position after they spent money on these players uselessly.

It is worth noting that Real Madrid were knocked out in the semi-finals of the Spanish Super Cup at the hands of Athletic Bilbao.