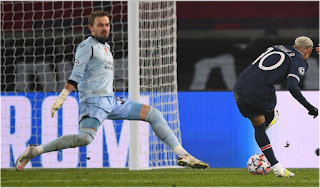 Paris Saint Germain is hosting its Turkish counterpart, Basaksehir, led by referee Danny Makeli, at the Princes 'Garden Stadium, within the two teams' matches in the sixth round of Group H of the UEFA Champions League competition, the match is held without the presence of the masses due to the Corona pandemic.

In the sixth and final round of the Champions League competition, at the Princes Garden Stadium, Paris crushed its guest Basaksehir by five for a single goal.

In the 21st minute, Neymar scored the first goal for Paris, after a wonderful pass from Verratti that reached Neymar to deflect the defender and hit it in the net.

In the 42nd minute, Mbabi scored the third for Paris Saint-Germain, from a penalty that Neymar got from a mistake on the goalkeeper.

In the 49th minute, Neymar scored a hat-trick for him and the fourth for his team, after a wonderful dribbling of the defender and a powerful shot from outside the penalty area to find the ball in the net, declaring the Parisian supremely four goals.

In the 56th minute, the first goal of Basaksehir came through Muhammad Tobal, after a strong shot from Irfan that Kahwaji collided with Muhammad Tobal, which Navas could not deal with to settle the net.

In the 61st minute, Mbabi added the fifth goal to Paris, after a wonderful pass by Di Maria, who scored in the empty goal.

Then Mbappe and Di Maria missed more than one opportunity achieved with extreme recklessness, while coach Thomas Tuchel moved to rest his players, as Kerir joined the place of Marquinhos, and then pushed by the three Pimpelli, Gaye and Diallo in place of Florenzi, Ferrati and Kimbembe.

To end the meeting five-way to Paris qualify them as the first center of the group.