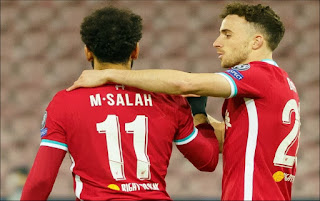 The Danish club Mittelland will host its English counterpart, Liverpool, at the MCH stadium led by referee Francois Letizky, within the two teams' matches in the European Champions League competition, from the home stage, and the first leg between the two teams ended with a victory for Liverpool 2-0, the match is held without the presence of the fans. Corona pandemic.

The starting line-up for the Danish team, Mittelland, led by coach Brian Bresky:

Follow up the events of the meeting minute by minute

The beginning of the first half

Minute 7, short passes between Liverpool players in the midfield.

The 18th minute was a cross from Minamino from the right side to Jota, a powerful shot, but was blocked by the Maitland goalkeeper.

The 24th minute, a cross from the left side in favor of Maitland, was successfully dispersed by the Liverpool defense.

The 27th minute is a short pass between the Mittland players in the midfield.

The 31st minute, a wonderful counterattack from Liverpool, and a magic pass from Mohamed Salah to Origi, who hit it near the left post.

The 36th minute, strong pressure from Maitland to score the equalizer.

The 44th minute, a cross from the right side reaches Suri Kaba to the left of the penalty area, a powerful shot saved by the goalkeeper.

The 45th minute was a pass from Mohamed Salah to Diogo Jota, a wonderful shot from the left of the penalty area, which was blocked by the Maitland goalkeeper.

The 45th minute is two minutes, instead of lost time.

The beginning of the second half events

The 48th minute, a powerful shot by Maitland team hit the crossbar, and rebounded to Suri Kaba, who shot a double back next to the post.

The 54th minute was a cross from the left side in favor of Maitland at the head of Suri Kaba, a powerful shot near the left post.

The 61st minute, a penalty kick in favor of Maitland by Anders Draer, after being blocked by the goalkeeper Kaumen Keller.

The 62nd minute, gooooooool, a tie in favor of Maitland through Scholes.

The 72nd minute, a curved ball from a right-side foul by Evander, was successfully dispersed by the Liverpool defense.

77 minutes into the game, a goal was canceled for Maitland by Alexander Schulz.

The 80th minute attempts by the players of both teams to score the second goal.

The 89th minute will count 8 minutes of time instead of lost.

The 90th minute + 5 shot by Mitland, outside the penalty area, was blocked by the goalkeeper.

The 90th minute + 6 shot by Anderson Maitland player from outside the penalty area above Liverpool's goal.

The end of the match

The Egyptian international, Mohamed Salah, the Liverpool player, opened the scoring in the match after only 55 seconds against the Danish team, Maitland, in the match that took place between them in the Champions League, scoring the first goal in favor of the Liverpool team, where he pressed the Mittelland defender, and made him miss, to fall to the ground And he launched the ball from halfway through the field at his speed until he penetrated the penalty area, and succeeded in shaking the net of Maitland.

With this goal, Mohamed Salah became the fastest player in the history of Liverpool to score goals in the European Champions League.

He also became one of the most famous Liverpool players in history in the Champions League.

After that, Mittelland tried to respond quickly, through the header of the player Svatchenko, who moved away from the Liverpool goal in the fifth minute, and goalkeeper Kelleher coped well with her in the 14th minute.

It was possible for Liverpool to score a second goal in the 20th minute, through Minamino from the right, and directed a ball into the penalty area and reached the player Jota, who shot it, to prevent it from the Danish goalkeeper.

The Danish team tied in the 62nd minute through Alexander Scholes, through a penalty kick that he executed brilliantly.

The match ended with a 1-1 draw

With this result, Liverpool's tally rose to 13 points in the top of the group, which it had previously been against in qualifying for.

Meanwhile, the Danish team, Maitland, rose to two points in last place and deposited the championship.