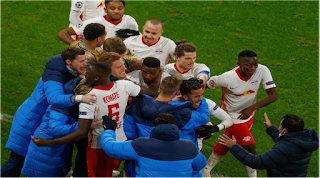 The German club Leipzig will host its counterpart, the English team Manchester United, at the Red Bull Arena, led by referee Antonio Miguel Lahues, within the two teams ’matches in the European Champions League competition, from the second stage, and the first leg between the two teams ended with a victory for Manchester 5-0. The masses due to the Corona pandemic.

The starting line-up for the German team Leipzig led by coach Paulian Nagelsmann:

The starting line-up for Manchester United, led by coach Solshire:

Manchester United left the Champions League from the group stage, after defeating Leipzig, 3-2, in their match at the Red Bull Arena on Tuesday evening, at the end of the group stage.

Leipzig scored a hat-trick by Angelino in the second minute, Amadou Haidara in the 13th minute, and Justin Kluivert in the 69th minute, while United's goals were scored by Bruno Fernandez in the 80th minute and Paul Pogba in the 83rd minute.

With this result, Leipzig rose to 12 points at the top of Group H, ensuring qualification for the next round, while United stuck at 9 points in third place, to go to the European League.

Leipzig started the game strongly and opened the scoring in the 2nd minute, after Sabitzer sent the ball to Angelino on the left side of the penalty area, to hit a powerful ball that landed in the goalkeeper de Gea.

Angelino reappeared with another ground shot from the left side of the penalty area, which was caught by goalkeeper De Gea.

Manchester United nearly equaled the score quickly in the 9th minute, with a quick counterattack led by Greenwood, who reached the penalty area, before he hit a ground ball, which was blocked by goalkeeper Galaxy.

Leipzig added the second goal in the 3rd minute, after Angelino sent a cross that reached the uncontrolled Hydara to hit a powerful ball that landed De Gea's net.

Leipzig was close to adding the 3 goal in the 17th minute, after Angelino sent a cross to Forsberg, which was unattended, in the penalty area, to pay it, strangely, passed next to the post.

Manchester United began to appear offensive again in the 24th minute, with a cross from Telles from a corner kick, followed by Greenwood with a header above the bar.

The mouse technique kept Manchester United's hopes alive, after canceling a goal in the 30th minute for Leipzig for offside.

Sabitzer hit the ball from the edge of the penalty area in the 45th minute, to end the first half with Leipzig leading two unanswered goals.

At the start of the second half, coach Solskjaer made the first switch for Manchester United, with Van de Beek dropping at the expense of Tillis.

And Manchester United obtained a violation from the borders of the penalty area in the 68th minute, which was implemented by the player Fernandez with a direct shot that collided in the crossbar.

Kluivert scored the third goal in the 69th minute, after Angelino sent a cross from the left side, and arrived at Kluivert, to separate myself and score the ball easily.

Rashford tried to score a goal in goalkeeper Galaxy in the 65th minute, with a ground shot from the edge of the penalty area, but his ball passed to the side of the post shortly.

Manchester United got a penalty kick in the 78th minute, Greenwood was handicapped by Konate, and Fernandez successfully executed the kick to the right of Galaxy to reduce the difference to two goals.

United added the second goal in the 82nd minute, after Pogba lifted a cross from a corner kick, hitting a header that hit Konate and entered the net.

The player, my client, almost drew to United by mistake while trying to banish Pogba's cross.