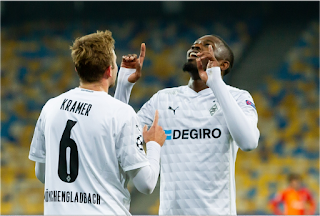 Shakhtar Donetsk Club in the UEFA Champions League will host its German counterpart, Borussia Moenchengladbach, today, 3-11-2020, at 19:55 today, Tuesday, Egypt time, led by referee Serdar Josuboyuk, at the Donbas Arena, within the matches of the two teams in the first leg of the Champions League competition In group B, the match will be played without the fans attending due to the Corona pandemic.
The starting line-up of Ukrainian club Shakhtar, led by coach Luis Castro:
Tropin - Dudu - Bonder - Khuchulava - Kornenko - Maicon - Antonio - Titi - Marlos - Solomon - Tyson
The starting line-up for Borussia Moenchengladbach, led by coach Marco Rose:
Sommer - Liner - Ginter - Elvedi - Seventy - Creamer - Nohouse - Hoffmann - Stendel - Thuram - Ble
Borussia Moenchengladbach won a landslide victory over the home side Shakhtar with six goals without response in the match that brought the two teams together today at the "Donbas Arena" in the second group competitions of the European Champions League.
With the beginning of the first half, the player, Al-Hassani Playa, opened the scoring in the 8th minute, then Bonder added the second goal, and to deepen the wounds further, Al-Hassani Playa adds his second and third goal to his team, and before the end of the half, Rami Bin Sebaini scores the fourth goal to end the first half with four goals for nothing.
With the start of the second half, Stindel adds the fifth goal, then the sixth goal, Hasani Playa, adds the sixth, to end the match with six goals for nothing in favor of Borussia Moenchengladbach.
With this result, Borussia Moenchengladbach's balance rose by 5 points to jump to first place at the top of his group, and Shakhtar's score stopped at 4 points to remain in third place equal to Real Madrid in points.
ChampionsLeague