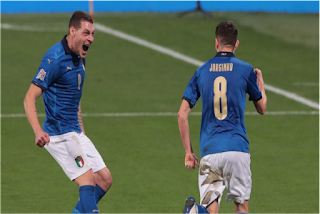 The Italian national team will host its counterpart Poland today on 11-15-2020 on Sunday evening, led by referee Clemen Turpan, at the Olimpco Roma Stadium, within the matches of the two teams in the first leg of Group A1 in the European Nations League competition, the match will be held without the presence of the masses due to the Corona pandemic .

The starting line-up for Italy, led by coach Roberto Mancini:

The starting line-up for Poland, led by coach Yerzi Przentjek:

The Italian national team won a deserved and valuable victory at the expense of its Polish counterpart, 2-0 in the fifth and penultimate round of the European Nations League.

The Italian team raised its score after this victory to 9 points at the top of Group A, one point behind the runner-up Netherlands, while Poland's balance stuck at 7 points in third place.

The Italian team scored the goal of progress through Jorginho from a penalty kick in the 27th minute, while Domenico Berardi scored a second goal for the Italian team in the 83rd minute.