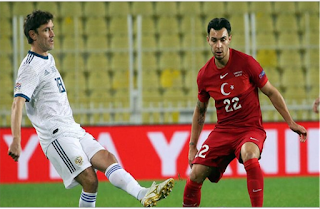 The Turkish team achieved an impressive victory at the expense of its Russian guest, in the match that came in the fifth round of the European Nations League groups, with a score of 3-2.

To raise the Turkish team's score to 6 points, to consolidate its position in third place, from Group C of the second level, and the balance of the Russian national team stuck at 8 points, and remained in the first place.

The Russians took a heavy hit, after Andrei Semenov was hit in the 24th minute.

The Turks took advantage of that after two minutes and scored the equalizer by Kenan Karaman, then scored the goal of progress through Genghis Onder in the 32nd minute of the match.

Genk Tosin strengthened the home side's lead with a third goal in the 52nd minute from a penalty kick, and the visitors reduced the difference at 57 with a goal by Dalir Koziaev.