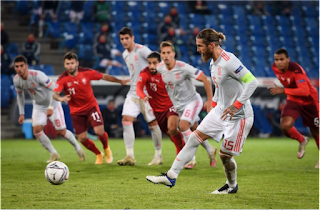 The Swiss national team will host its counterpart Spain today, on 11/14/2020, on Thursday evening, led by referee William Coulom, at Saint Jacob Park, as part of the matches of the two teams in the 4A first leg of the European Nations League competition. .

The starting line-up for Switzerland, led by coach Vladimir Petkovic:

The starting line-up for Spain, led by coach Luis Enrique:

The first leg of the match was 0: 1 in favor of Spain.

In the fifth round of the European Nations League competition, Switzerland tied with its guest Spain at Saint Jacob Park.

In the first half, Switzerland took the lead since the 26th minute by Remo Friller after a distinguished end to the attack, describing the goal - Brill Empolo sent a cross pass from the right, which Froler met with a direct shot that hit the net in the far right corner of the goal, to end the first half with the progress of the home side.

In the second half, and in the 57th minute, the referee blew his whistle, announcing a penalty kick in favor of Spain due to a handball by Ricardo Rodriguez from inside the penalty area, to be shot by Sergio Ramos on the left side of the goal, but goalkeeper Sumer brilliantly blocked it.

In the 79th minute, Spain won a second penalty kick after Morata was blocked by Niko Elvedi inside the penalty area, to be paid by Sergio Ramos, strangely, and goalkeeper Sumer succeeded in catching the ball, and the second goal of Spain was lost.

In the 89th minute, the Spanish national team scored the equalizer through Gerrard Moreno, describing the goal - from a quick counterattack, Sergio Regilon sent the ball from the left into the penalty area, and Gerrard Moreno met it with a direct shot into the goal.

The draw raised Spain's balance to 8 points in second place in Group D with two wins, two draws and a defeat. Switzerland raised the score at 3 points in fourth place from two defeats and three draws