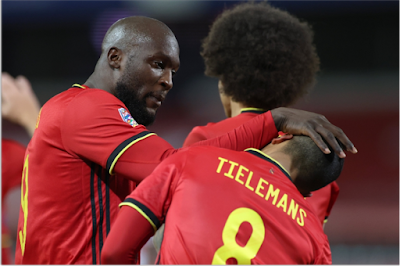 The Belgium national team will host its counterpart, England, today, 11-15-2020, on Sunday evening, under the leadership of referee Danny Makeley, at the Rio Bowdoin stadium, within the two teams' matches in the first leg of Group A2 in the European Nations League competition, the match will be held without the presence of the masses due to the Corona pandemic .

The starting line-up for the Belgium national team led by coach Roberto Martinez:

The Belgian national team qualified for the semi-finals of the European Nations League, after defeating its counterpart, England, 2-0, in the fifth and penultimate round, at the "King Baudouin" stadium.

The Belgian national team raised its score to 12 points at the top of the group, while the English national team stuck at 7 points in third place behind Denmark.

The Belgian national team scored the goal of progress through Yuri Telemans in the "10" minute, after a shot from outside the penalty area hit the post and hit the net.

In the "24th" minute, the Belgian national team scored a second goal through Dries Mertens, after a direct free kick by Dries Mertens in a wonderful way against the goalkeeper Beckford.