-->
F
Home ChampionsLeague The result and details of the match events, Real Madrid and Inter Milan, in the Champions League competition

The result and details of the match events, Real Madrid and Inter Milan, in the Champions League competition 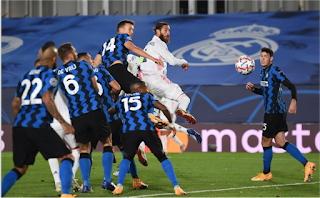 Real Madrid in the Champions League will host its counterpart, Inter Milan, today, on 3-11-2020, today, Tuesday, under the leadership of referee Clement Turpin, at the Alfredo Di Stefano Stadium, within the matches of the two teams in the first leg of the UEFA Champions League. Corona pandemic.

Real Madrid will host Inter Milan as part of the third round of the Champions League group stage matches.

Real Madrid are last with one point from a draw and a loss, while Inter have two points in third.

The beginning of the first half

Minute 1: The referee blows the whistle at the start of the match

Minute 3: A fight between the players of the two teams in the middle of the field.

Minute 4: Asensio hit the ball from inside the penalty area after a wonderful pass from Hazard, but Handanovic saved it brilliantly.

Minute 6: Valverde hit a powerful ball from outside the penalty area, which passed over the bar outside the field.

Minute 10: The passage of the first 10 minutes after the match, and a negative tie between the two teams.

The 11th minute: Perisic sent a cross pass from inside the penalty area to the left, which was met by Niccolo Barrilla with a header that hit the crossbar and left the field.

The 13th minute: A shot by the goalkeeper by Toni Kroos.

15th minute: Fawel for Varane in the half of the field.

20th minute: Between Vasquez, but you can't find anyone but the goalkeeper.

The 23rd minute: A powerful shot from Real, but the goalkeeper shines.

24th minute: A cross from Ashraf Hakimi, but a corner comes out.

The 26th minute: a fatal mistake from Hakimi, who was taken advantage of by Benzema and scored the first goal.

The 33rd minute: An elaborate cross from a cross that Ramos puts his head into the net.

The 35th minute: Martinez scored the first goal after a great game.

39th minute: A foul in favor of Hazard.

End of the first half

beginning of the second half

46th minute: The start of the second half.

48th minute: A yellow card by Ferland Mendy, after a strong intervention on Hakimi.

53 minutes: A mistake in favor of Inter Milan from the middle of the field on the left.

54th minute: The ball was sent into the penalty area and was easily caught by goalkeeper Courtois.

The 57th minute: Niccolo Barrilla was injured after a strong intervention by Ramos, and he was taken off the field for treatment.

58th minute: Barrilla comes down to the field after receiving treatment.

The 63rd minute: A yellow card for Valverde after a strong intervention on Parrilla.

The 66th minute: Vázquez hit the ball from the edge of the penalty area and a corner passed near the left post outside the field.

The 68th minute: Gooooooooooooool, the second goal for Inter Milan through Perisic.

The 72nd minute: a yellow card by Niccolo Barrilla to challenge the referee's decisions.

85th minute: A yellow card by Casemiro after the last intervention.

Congratulations to the royal fans and good luck to the Inter fans.