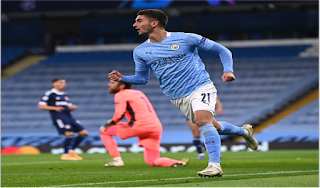 Manchester City club in the European Champions League will host its counterpart, the Greek Olympiakos team, today, 3-11-2020, at 22:00 today, Tuesday, Egypt time, led by referee Carlos Del Siro, at the Etihad Stadium, within the matches of the two teams in the first leg of the Champions League competition The match will be held without the presence of the fans, due to the Corona pandemic.

Manchester City managed to achieve a comfortable victory at the expense of the Greek team by 3 goals, which were scored by newcomer Ferran Torres in the 12th minute and Gabriel Jesus, who returned from injury in the 81st minute. Joao Cancelo concluded the goals in the last minute.

Manchester City reached the ninth point in the table of the third group standings, where it won all matches, while Porto of Portugal ranks second with a 3-0 victory over Marseille.

Coach Pep Guardiola took advantage of the return of his Brazilian striker Gabriel Jesus, who missed for two months due to injury, to be an additional option in the coming period in which Citizen suffers from infertility scoring locally.