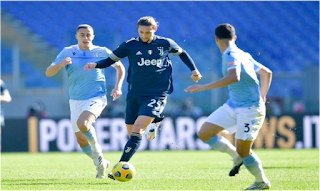 The Italian club Lazio hosted its Italian counterpart Juventus in the Italian league today, Sunday 08-11-2020, at the Olimpico Stadium, within the matches of the two teams in the first leg of the Italian League competition, from the seventh week, the match is held without the presence of the masses, due to the Corona pandemic.

In the seventh week of the Italian league, Juventus stumbled and settled with a draw against Lazio, with a goal for each side at Olympico Stadium, as part of the meeting that brought them together on Sunday afternoon.

Cristiano Ronaldo advanced to Juventus early in the match, before Felipe Caicedo equalized in the final second of the match.

Ronaldo scored in the 15th minute after the Juan Cuadrado cross, to raise his tally to 6 goals in the Italian league this season and continue his strong comeback since his recovery from the Corona virus.

But the Portuguese star left the field in the 76th minute, leaving his place to Paulo Dybala, and he appeared to complain of ankle pain.

The substitute who had the greatest impact in the match was Ecuadorian Caicedo, who entered the 54th minute.

The former Espanyol striker took advantage of a breakthrough by Joaquín Correa from the left side, to fire a powerful shot that hit Chesney in the fourth minute of stoppage time, and shocked the Juventus elements, who dropped two valuable points.