-->
F
Home Premier League : It is not easy to defend against Liverpool's attack ... and the draw is fair

: It is not easy to defend against Liverpool's attack ... and the draw is fair 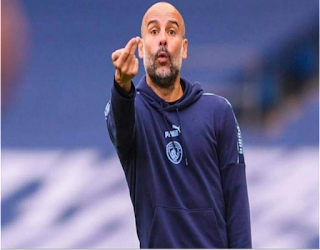 Manchester City's coach, Pep Guardiola, believes that the draw with Liverpool (1-1) is fair, in the match that was held at the Etihad Stadium for the top of the eighth round of the Premier League.

The Egyptian Mohamed Salah opened the score for the Reds in the 13th minute with a penalty kick, and Brazilian Gabriel Jesus equalized for the Citizens in the 31st minute, after a pass from the Belgian Kevin De Bruyne, who missed a penalty later.

Guardiola told Sky Sports: "A difficult match, they started well, we received a goal from the penalty spot. In the second half, we had more clear chances, but a fair draw."

He continued: "It is not easy to defend against Liverpool, they usually have three in the attack, but they started with four, and they were playing between the lines, it was not easy, but we adapted a little and became more in control."

He continued: "We scored a good goal and unfortunately we missed a penalty kick, in matches or competitors such as Liverpool, if a penalty kick is missed it will be more difficult."

Turning to talk about Jesus: "Three games and three goals for Gabriel Jesus. After returning from injury, he did not train much so he gave a really good performance."

He added: "When you cannot win in 80-85 minutes, you cannot lose. When you play against a competitor like Liverpool, you have to try to win but you cannot lose, we know each other very well."

He ended: "The way they played and the way we treated it was great. I am very proud of my players. The difference today is that they scored a penalty and we wasted it."