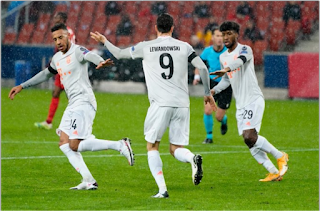 Salzburg in the European Champions League will host its counterpart, Bayer Munich, today, 3-11-2020 at 22:00 today, Tuesday, Egypt local time, led by referee Danny McKelly, at the Salzburg Stadium, within the matches of the two teams in the first leg of the Champions League competition. The match without the crowd attending due to the Corona pandemic.

Bayern Munich managed to overturn the result of being trailed by Red Bull Salzburg of Austria to a dramatic 6/2 victory in the third round of the Champions League Group A matches.

At the start of the first half, Mirjem Berisha advanced with an early goal for the hosts in the fourth minute, but Polish sniper Robert Lewandowski equalized for Bayern from a penalty kick in the 21st minute.

Bayern took advantage of a goal by Rasmus Christensen, Red Bull player, by mistake in his own net in the 44th minute, and then Red Bull scored the equalizer by Masaya Okogawa in the 66th minute.

The Bavarian club decided the victory in the final minutes, as Jerome Boateng scored the third goal in the 79th minute, followed by Leroy Sane, scoring the fourth goal in the 83rd minute, before Lewandowski scored his second and fifth goal for his team in the 88th minute, and Lucas Hernandez finished scoring in stoppage time.

The victory raised Bayern's balance to nine points in the lead from three consecutive victories, and Red Bull stopped at one point in last place.