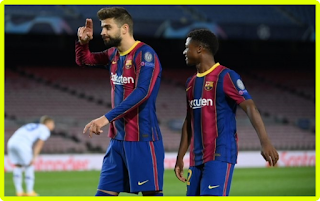 Barcelona in the European Champions League will host the Ukrainian team Dynamo Kiev today on 11/4/2020 at 22:00 today, Wednesday, led by referee Michael Olivier, at Jean Stadium, within the matches of the two teams in the Champions League first leg, the championship without the fans. Corona schedule.

The main center of the Ukrainian club Dynamo Kiev, led by coach Losescu:

Starting the first half

Minute 2: A cross by Lionel Messi from the left side, passed without a watch for Barcelona, ​​inside the penalty area.

Minute 4: Constant pressure from Barcelona players in search of a first goal.

Number 5: A penalty kick in favor of Barcelona after hindering the successful passage of Lionel Messi inside the penalty area.

12th minute: Short passes for Barcelona players in the middle of the field.

14: Ansu Fati passed beautifully to the left of the penalty area, then denounced a ball that Ruslan Nichsherit removed from the bottom right of his own goal.

18: A free kick ball in the penalty area.

The 18th minute: A shot by Lionel Messi from the left of the penalty area was removed by the goalkeeper from the left to a corner of the right.

23rd minute: Successive passes between the brackets of Dynamo Kiev in the middle of the field.

The 30th minute: a quarter of an hour after the end of the first half, and the score still indicates the Barcelona team's progress with a goal to none.

31st minute: Lull in the game.

33: A cross by Sergio Dost Barcelona player from the right, but Kiev's defense kept it away from dangerous areas.

35: A header from Kiev player Vitaly Boyalski from inside the penalty area, Mark Ter Stegen brilliantly removed his goal.

Goal 38: attempts by the Kiev players to equalize, but did not rise to the level of danger.

The 40th minute: a minute minutes into the end of the first half, and the score still indicates the Barcelona team's progress with a goal to none.

The 43rd minute: A shot by Barcelona player Pedro Gonzalez Lopez from the edge of the penalty area passed just above the bar.

45th minute: the end of the first half.

Starting the second half

46th minute: A quiet start to the events of the second half.

50th minute: Successive passes between the feet of Barcelona players in the middle of the field.

The 52nd minute: Vladislav Sobrija was completely alone with the Barcelona team, with a shot from the right of the penalty area, which was brilliantly removed by Marc Ter Stegen from the right of his own goal.

The 58th minute: A free kick by Barcelona at the edge of the Kiev penalty area, which was executed beautifully into a corner from the left side.

62nd minute: a horse in the middle of the field from both goals.

65th minute: A second gooool for the Barcelona team, through Gerard Pique.

The 66th minute: Goal description - a cross from the left side, which Gerard Pique met with a header from inside the penalty area that was located on the far left of the goal.

70: A yellow card went to Vitaly Boyalsky, Kiev after a violent intervention.

The 77th minute: Successive passes between the feet of Barcelona players in the middle of the field.

The 80th minute: A shot by Othman Dembele at the edge of the penalty area on the left side, the goalkeeper brilliantly removed it from the top right of his goal to the corner of the left.

85th minute: Five minutes after the end of the match, and the result indicates the Barcelona team's progress with a goal.

88: Attempts by the Kiev players to realize the goal of the goal matched by a good defensive positioning of the players of the minute Barcelona.

The 90th minute: A referee added 3 minutes in injury time.

The 93rd minute: The end of the match with Barcelona's victory