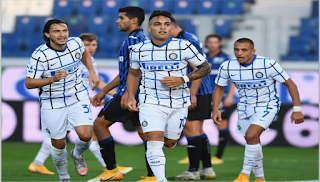 The Italian club Atlanta will host its Italian counterpart, Inter Milan, in the Italian league today, on 08-11-2020 at 17:00 today, Sunday, Mecca time, at the Guis Stadium, led by referee Daniele Doveri, within the matches of the two teams in the first leg of the Italian League competition, From the seventh week, the match will take place without the presence of the fans due to the Corona pandemic.

Atalanta started the meeting with expected pressure on Inter, and Dovan Zapata got a free kick on the borders of the area, which Gomez hit the wall, while Inter responded with a dangerous opportunity after the Darmian penetrated the area and passed to Lautaro, who almost scored without the brilliance of Romero, Atalanta defender, who kept the ball away from in front. Inter striker

In the 17th minute, on the right, Friller passed a cross into the penalty area for Inter, and headed straight towards the goal, so Handanovic shone and brilliantly removed it.

Inter responded again after one minute, as the ball reached Sanchez on the right, and the Chilean passed the ball to Lautaro, who hit a weak ground near the goal.

Vidal came close to scoring the first goal, after the defender Bastoni crossed the ball from the left, Vidal raised it above everyone else and hit his head over the bar in the 25th minute.

Lautaro Martinez opened the score in the 58th minute, after several passes, with a perfect header from a cross.

Young almost scored a goal after shooting from a distance, but his ball passed by the left post of Atalanta's goal.

In the 65th minute, Vidal wasted a frank solitary goal after he hit the ball to save the goalkeeper Sportillo, to bounce to Barilla and kick it directly into the goal, but the goalkeeper shone again and pushed it to the corner.

Substitute Miranshuk managed to adjust the score for Atalanta in the 79th minute, after receiving a pass from Muriel, hitting a floor from the edge of the penalty area that landed at Handanovic.

Muriel was close to scoring a deadly goal, after he met a cross from the right who pounced on her from among Inter's defenders, header and then passed by the post.