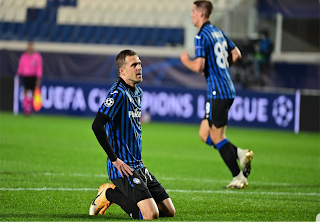 The Ukrainian team, Shakhtar Donetsk, will host its Italian counterpart, Inter Milan, today, 10/27/2020, at 08:55 pm today, Tuesday, Saudi Arabia time, led by the referee, Georgi Kabakov, at the Donbas Arena, within the two teams' matches in the second round of the Group League in the Champions League competition from Group B, due to the Corona pandemic, the match will be held in the presence of a limited number of fans.

With this tie, Shakhtar raised his score to 4 points at the top of Group Two, while Inter Milan raised its tally to two points in second place.

Shakhtar received a painful blow at the start of the match, after he made an emergency substitution, with Dentinho leaving the injury and Tyson descending instead in the 14th minute.

In the first threat to meet after a quarter of an hour had passed, Lautaro Martinez rose to meet a cross with an easy header into the goalkeeper's arms.

Barrilla returned again with a chance, after he launched the ball and penetrated into the area, and the defender of Shakhtar appalled to shoot the goal and confront the goalkeeper, but the referee blew his whistle in the presence of an offside case on Barilla.

And dangerous opportunities continued on the home side's goal, and from a corner kick in the 21st minute, Lukaku rose and met the ball with a header that went past the post.

Shakhtar tried to break the Italian lead by advancing to the Inter goal, but Shakhtar's first attempt did not live up to the danger, after Maicon fired a weak ball from a distance that passed peacefully at Handanovic's goal in the 25th minute.

Dudu, Shakhtar's back, fired a powerful shot from in front of the penalty area and reached the heart of goalkeeper Samir Handanovic.

And again, the crossbar stood in front of Inter after a shot from Lukaku in the 41st minute, after Romelu hit a free kick directly towards the goal, which the goalkeeper sent away with the tips of his fingers to hit the crossbar, to end the first half with a goalless draw.

Inter continued their attempts on goal in the second half, and in the 57th minute, Arturo Vidal, the Nerazzurri midfielder, rose to a corner kick with a header over the crossbar.

After a joint ball, Lukaku demanded the Inter striker, to obtain a penalty after being blocked by Bondar, but the referee indicated that the game would be completed without any violation.

The two teams exchanged attacks, until the referee blew the whistle at the end of the match with a goalless draw.