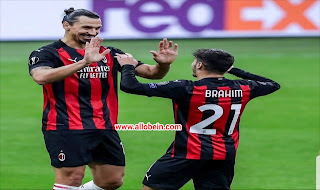 The Italian team, Milan, its counterpart, Sparta Prague, today, 10/29/2020, at 08:55 pm today, Thursday, Saudi Arabia, led by referee Halis Ozkahia, at the San Siro Stadium (Giuseppe Meazza), within the two teams' matches in the second round of the match Going to the groups league in the European League competition from Group H, the match will be held without the presence of the masses due to the Corona pandemic.

The starting line-up for Milan, led by coach Stefano Pioli:

The match ended with the Italian club Milan defeating its guest Sparta Prague, 3-0, to keep Milan winning this season.

The "Opta" network, specialized in monitoring statistics, stated that Milan had scored two goals or more, in 12 games in a row, in all competitions, for the first time in its history, since the launch of the Italian League 1929-1930 season.

Swedish star Zlatan Ibrahimovic's companions have reached 23 games in a row, without defeat in all competitions.

Milan ended the first half, beating with a clean goal, scored by the young Spanish winger Brahim Diaz, after receiving a cross from the Swedish star Zlatan Ibrahimovic, before dodging the Sparta Prague defender and struck between the feet of the goalkeeper, in the 24th minute.

Ibrahimovic missed a penalty kick for the Rossoneri, in the 36th minute, after his shot hit the crossbar.

In the second half, Portuguese striker Liao, who replaced the Swedish star Ibrahimovic, between the two halves of the match, scored the second goal, in the 57th minute.

Portuguese right-back Dalot finished the Rossoneri hat-trick in the Czech team, in the 66th minute.

With this, Milan, the eighth group of the European League, topped with 6 points, then the French Lille 4 points, in second place, Celtic one point in third place, and finally Sparta Prague, without a balance of points.