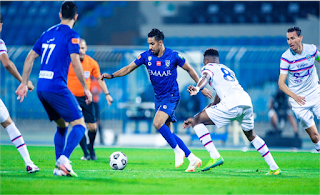 Al Hilal Saudi Arabia will host its Saudi counterpart, Abha, today, 10/27-2020, at 05:55 pm today, Tuesday, Kingdom of Saudi Arabia, at Prince Faisal bin Fahd Stadium (Al-Malaz), within the matches of the two teams from the postponed match in the semi-finals of the Custodian of the Two Holy Mosques Cup The two sheriffs, the match will be held without the presence of the fans, due to the Corona pandemic.

The match ended with the victory of the Saudi team Al Hilal over its Saudi guest Abha with two goals without response, and Al Hilal scored a double in the Abha net, through Salem Al Dossary and Sebastian Giovinco in the 28th and 45th + 1 minutes.

Thus, the Al-Hilal team, the league title holder at the expense of Abha, qualifies for the final match of the King's Cup, and is waiting for the winner from Al-Ahly and Al-Nasr summit, which will be played this evening in Jeddah.

Al-Hilal entered with great offensive pressure, and almost scored a goal through its Syrian star Omar Khirbin after he received a ball with great skill inside the penalty area and hit a strong ball to hit the crossbar and bounce back to Carilo, who fired it with extreme frivolity near the right post.

Abha responded by pressing the offensive in search of registration, but Al-Hilali's defense was strong and responded to it.

In the 17th minute, Giovinco fired a direct free kick, but Abha's goalkeeper removed it to reach Yasser Al-Shahrani, who hit a powerful ball near the right post.

He explained the great control of the ball by Al Hilal players, amid a distinct defensive organization from Abha, which relied on quick counter-attacks, and a negative tie between the two teams remained after 25 minutes.

Before the 28th minute endured, Hilal's first goal was with a very impressive right-wing shot from Salem Al-Dossary, which housed the left scissors of goalkeeper Abdelali Al-Muhammadi.

Al Hilal attacks continued in search of the second goal, but the haste and lack of accuracy in front of the goal from Khirbin and his companions is the case for the scoring countries.

The Abha team tried offensively, but its balls ended at the defense and Al Hilali goalkeeper Abdullah Al-Mayouf.

In the 44th minute, Abha almost added the equalizer after a ball reached Amin Atouchi and hit a strong ball, but the well-known goalkeeper blocked it.

Before Giovinco added the second goal for Al Hilal in the first minute of stoppage time, after following an elaborate cross pass from Salem Al Dossary, to be skillfully placed by the Italian into the net of Abdelali Al Muhammadi.

The first half ended with Al-Hilal winning the performance and result in front of Abha 2-0.

After the final whistle blew, the referee declared a yellow card to Romanian Razvan Lucescu for his objection to the decisions of the Paraguayan referee Iber Aquino, amid great anger from the coach and an attempt by Salman Al-Faraj to calm him.

Al-Hilal continued to dominate the ball, and almost added a third goal through his right-back Mohamed Al-Barik, but his shot went past the right post.

In the 55th minute, the Tunisian coach Abdel Razzaq made an emergency substitution by leaving the star of Abha, Saad Baqir, with the injury, and substituting him inside the stadium, Abdel Rahman Al-Baraka, as well as replacing Sari Amr and putting the player Ali Ya'an Allah.

Mahdi Tahrat and Godwin fired two strong shots from outside the penalty area, but Al Hilali goalkeeper Abdullah Al-Mayouf dealt with them as he should.

Coach Lucescu placed striker Pavitembe Gomez as a substitute for Omar Khirbin, as well as Salman Al-Faraj returned after recovering from injury and replaced Lucknow and received the captaincy of the Hilali team in the 76th minute.

Salman Al-Faraj was injured, before he was treated and returned to the field.

Al-Hilal tried to score a third goal through attacks by Gomez, Carrillo and their companions, but defense and goalkeeper Abdelali Al-Mohammadi responded to the attempts valiantly, to end the meeting with Al-Hilal's victory over Abha 2-0.