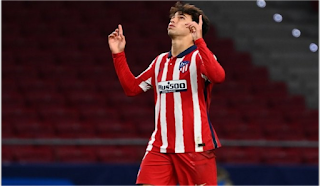 The Spanish team Atlético Madrid will host its Austrian counterpart, Red Bull Salzburg, today, 10/27/2020, at 11:00 pm today, Tuesday, Saudi Arabia, led by referee Ovidio Allen Hategan, at the Wanda Metropolitano Stadium, within the two teams ’matches in the second round of the group tournament in the League competition. European champions from Group A, due to the Corona pandemic, the match will be held without the presence of the fans.

The match ended with a difficult 3-2 victory for Atletico Madrid against Paul Salzburg's response, Marcos Llorente led by a goal for Atletico in the first half, but Salzburg responded with goals from Dominique Chubuchlay and Mirjem Berisha.

Felix equalized for Atletico and then scored the winning goal 5 minutes before the end of normal time, as the Spanish team recovered from a 4-0 defeat by Bayern Munich in the opening round of the group stage.

Bayern lead the group with 6 points from the first two rounds, followed by Atletico with 3 points, Lokomotiv Moscow and Salzburg with one point for each team.

Atlético nearly took the lead after a double kick by Felix in the first quarter of an hour, but the ball hit the crossbar and exited.

Atletico advanced half an hour into play, as Llorente received the ball from 25 meters and shot a powerful ball past goalkeeper Tsetsan Stankovic, who felt he could have done more.

Llorente got a chance to double the score, as he was alone with goalkeeper Stankovic, but he wasted it and paid the price after Salzburg scored after that.

After a modest exchange of the ball in the middle of the field, Chubushlay had possession of the ball and fired a powerful shot past goalkeeper Jan Oblak before the break.

Salzburg began the second half strongly and took the lead, with Andreas Olmer sending a cross that Berisha turned into a goal.

But this advance did not last long, as Felix equalized from close range, before meeting a low cross and scoring the precious goal of the victory.