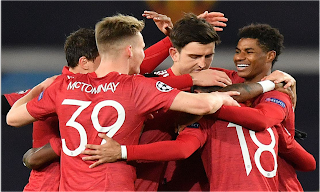 The English Manchester United team will host its Russian counterpart, Zenit Saint Petersburg, today, 10/28/2020, at 11:00 pm today, Saudi Arabia, led by referee Slavko, at Old Trafford, within the two teams ’matches in the second round of the first-leg match. The groups in the Champions League competition from Group F, the match will be held without the presence of the fans, due to the Corona pandemic.

The match ended with Manchester United winning a big victory over its German guest Leipzig with five goals without a response. Manchester United scored five, Mason Greenwood 21 and Marcus Rashford "hat-trick" in the 76th, 78th and 90th + 2 minutes, and Anthony Martial 87

With this result, Manchester United maintained the top of Group H and raised its tally to 6 points, while Leipzig stuck at 3 points to finish third.

The first attempt in the match in favor of Manchester United came in the sixth minute, with a shot from Fred, from the edge of the penalty area, and Jolaxi sent it away for a corner kick.

The match calmed down after that, before Manchester United succeeded in opening the scoring in the 21st minute, after Pogba passed an elaborate ball to Greenwood on the left side of the penalty area, to hit a creeping ball that hit the net.

And the response came quickly from Leipzig in the 24th minute, after Nkunko hit a powerful ball from the right side of the penalty area, and De Gea was brilliant in banishing a corner kick.

Obamecano tried to surprise De Gea with a shot from outside the penalty area in the 27th minute, but the ball went wide.

And Manchester United left possession of the ball for the guests, but Leipzig was unable to reach the Red Devils goal, ending the first half with the coach Solskjaer's men advancing with a clean goal.

And Manchester started the second half better, with an incursion by Martial into the left side of the penalty area in the 50th minute, and sent a cross that hit Konate's hand, to demand the players a penalty kick, but the referee did not count anything.

And immediately after, Greenwood hit a powerful ball from the right side of the penalty area, which was successfully saved by Galaxy.

United returned to form the danger again in the 61st minute, with a shot from Pogba from outside the penalty area, but the ball went far from the goal.

Solskjaer made two substitutions in the 63rd minute by descending Rashford and Macominay at the expense of Matic and Greenwood.

Leipzig almost scored the equalizer in the 65th minute, with a powerful header from Konate from inside the penalty area, but De Gea shone and kept it away for a corner kick.

In the 67th minute, Solskjaer pushed Fernandez at the expense of Van de Beek, and United got a foul in the 70th minute, which Fernandez deceptively executed after sending a cross from behind the wall towards Martial, but the Frenchman did not reach the ball and the goalkeeper removed it.

And Shao sent a cross from the left side in the 73rd minute, and it reached the uncontrolled Fernandez inside the penalty area, to shoot a ball at the bird that went far from the goal.

United fired the bullet of mercy at Leipzig by scoring the second goal in the 76th minute, after Fernandes passed a wonderful through ball to Rashford, who was alone by the midfield in the Galaxy, and kicked the ball into the net, to cancel the match referee at the beginning for offside, before reckoning it after returning to the runaway.

Rashford quickly added the third goal in the 78th minute, after he took advantage of a mistake in Leipzig's defense, to strike Fred with the ball and pass it to him, in turn dodging Obamecano and singling out the Galaxy and hit a strong ball that landed in the net.

Halstenberg climbed a cross from a corner kick in the 81st minute, hitting a header over the crossbar, and after that Solskjaer made two substitutions with Tuanzebe and Cavani at the expense of Bisaka and Pogba.

Manchester United won a penalty in the 85th minute, after Martial was handicapped by Sabitzer, and Martial successfully executed the kick.

Rashford scored the fifth goal in the second minute of stoppage time, after Marcial pushed into the left side, passing a ball to Marcus, who successfully fired into the net, to end the match with the home side's 5-0 victory.