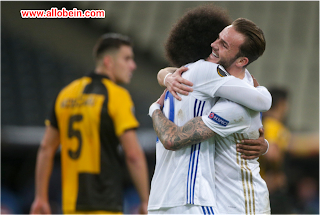 The Greek IEK Athena team will host its English counterpart Leicester City today 10/29/2020 at 08:55 pm today, Thursday, Saudi Arabia, led by referee Harald Leichner, at the Athens Olympic Stadium, Spiros Lewis, within the two teams' matches in the second round of the first leg For the groups league in the European League competition from Group G, the match will be held without the presence of the masses due to the Corona pandemic.

The match ended with a 2-1 victory for Leicester City at the expense of Greek club AEK Athens.

To bring the English team its tally to 6 points at the top of Group G with Portuguese Sporting Lisbon, and AEK Athens remained without balance.

The guests scored the first goal in the 18th minute of the match, through a penalty kick scored by the successful star Jimmy Vardy.

Midfielder Hamza Choudhury added the second goal of the Foxes in the minute, in the 39th minute, after the ball was set up in front of the penalty area, and he shot it into the net.

The home side narrowed the lead in the 49th minute with a goal by Swedish player Moamir Tankovic, but Leicester won in the end.